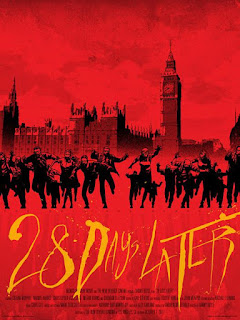 Tagline: “Be Thankful For Everything, For Soon There Will Be Nothing” You don't need Søren Kierkegaard to tell you this is bleak. I love it, I'm getting this tattooed somewhere, preferably not on me...

Premise: It is 28 days after the collapse of Britain to a highly contagious virus unleashed unwittingly from a lab by animal rights activists which turns people into rage driven, zombie-esque “infected”. Cillian Murphy's Jim wakes from a coma in London to find that things are a bit different than before his nap.

Execution: Famed now and lauded on its release in 2002 for director Danny Boyle's embracing of the digital video format, 28 Days Later both reinvented the zombie genre, a feat considering it's not technically a zombie film, and on a grander scale the way films are made on the whole. I first saw it at a cinema in Derby when I was at university, and instantly fell in love with every aspect of the film, the London setting, the bleak outlook, the violence, the soundtrack (I want the 28 Days Later Theme played at my funeral because I think it would be funny) and even the artwork all inspired me, and still do.

My re-watch of 28 Days Later recently may have been the first time I've seen it in a few years, but I've watched the film about 15 times in total, including once with the commentary on which I never do. I was pleased to find it still entertained me, quite a few films date or just lose their appeal over time, so it was nice that this old favourite hasn't. The concept still feels pretty fresh, actually. I don't think anything, bar the sequel which I also loved, has done apocalyptic London so well. Children of Men, which I'm working on a review of at the moment, depicts a bleak future London, but nothing as nihilistic as 28 Days Later.

The only thing which has dated 28 Days Later is the image quality, which despite being a blu ray copy I watched, now looks like one of my granddad's home videos when he got that camera at Christmas in the early 90's. Although obviously without the half hour section where he left the camera on its side in the kitchen, recording the wall with the noise of celebrations in the other room. Hopefully the powers that be, 4K Gods or whatever, get a cleaned up, remastered copy released soon.


Bedsit it? Yes, despite image issues, an inevitable side effect of the pioneering format choice, 28 Days Later is still a quality film and one of my all time favourites. If you didn't see the all time top ten horrors piece I wrote some months back, you can- here. 10/10.
Labels: 28 Days Later Action Bedsit Bedsit Cinema Cillian Murphy Danny Boyle Film Horror London Movie Thriller