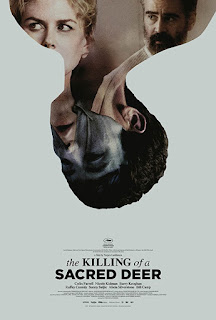 Tagline: Doesn't have one. A blank space is pretty appropriate.

Premise: The IMDb premise describes a “charismatic” surgeon, played by Colin Farrell, but if that's charismatic, then I've misunderstood the word all these years. Anyway, Farrell's heart surgeon Steven has an apparently lovely family, wife Anna (Nicole Kidman), daughter Kim and youngest, son Bob. He also has a strange friendship with a teenage boy, Martin, who turns out to be a little bit dangerous.

Execution: I saw this last night at the cinema, and quite frankly I still don't know how I feel about it. There are aspects of it that I loved, and also things which infuriated me. The first thing I noticed was the dialogue and delivery of lines. The speech patterns in The Killing OfA Sacred Deer (TKoaSD) are detached and dispassionate, like a Wes Anderson script if he was off his meds. In fact the whole film has the feeling that it was made by an auteur in the midst of a breakdown. You can't work out if it's genius or a cry for help.

To stay with the speech, while I like that someone exploited Wes Anderson's creepy dialogue style for horror, it doesn't make you engage with the characters. Farrell's character isn't charismatic, he's as emotionally tuned in as Rain Man. In fact all the characters engage with one another like they're on the spectrum. There's a lot of silence used, and a dearth of information to work with, which I'm not against per se, just you had to use it to your advantage, to create mystery, this just felt like someone had excised large parts of the script.

Having said that, there was enough to keep me watching. Well, just. That and the desire not to waste £11.50. The plot involves the creepy Martin exacting a Sophie's Choice style revenge over Farrell. This is all in the trailer, and there's not a lot more information in the extra hour and fifty nine minutes the film outlasts it by. There are some nice shots of hospital hallways though, if that's your thing.

TkoaSD is well shot, well acted (I'm guessing it was a style choice to make all the characters as warm as sociopaths) and in places unsettling. But here's my big issue with this film: it's not fucking scary! I usually love Mark Kermode but he's dropped a Chicago Sunroof all over my respect for him by rating this four stars. It's not a horror, it's a scary situation, sure, but so was Titanic and you didn't see shots of film critic ejaculate streaked all over reviews for that comparing it to The Exorcist.

Overall TKoaSD has its moments, but it's at best a moderately inventive psychodrama.


Bedsit it? By all means go and see this film, but it won't be long before it'll be out on Blu Ray, when you can ignore it there too. It was better than Farrell/ Kidman's previous effort together The Beguiled, but that's like saying being kicked in the dick is better than having it cut off. 5/10
Labels: Bedsit Bedsit Cinema Cinema Colin Farrell Comedy Family Film Horror Movie Rated Review Rio Cinema