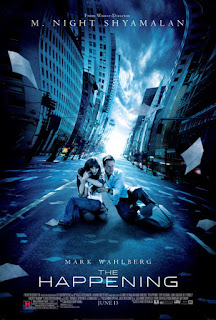 Tagline: “We've Sensed It. We've Seen The Signs. Now... It's Happening.” The smug shit who wrote this tagline, referring to Shyamalan's films The Sixth Sense and Signs, either needs kicking in the nuts or buying a beer. I can't decide.

Premise: People begin killing themselves for no reason. En masse. Turns out it's some sort of plague, which isn't to give anything away I assure you.

Execution: I first watched The Happening on a DVD, projected onto my living room wall, when I lived in New Cross, after splitting up with a girlfriend (I do a lot of that). Funny how films stick in your memory with all these other circumstantial details. I remember rather liking it, too, which given its score of 5.0/10 on IMDb is not unlike me considering the gruesome subject matter and my love of a bad film.

After said plague hits and builders dive (a little unconvincingly, the CGI has dated a bit) off the top of a building, people rush to get away from this invisible enemy, which has to be a metaphor for something clever, but I'm too tired to work it out. It's late on a Friday and I'm stuffed with curry. It's either something clever, or they just thought it's raining men was a directive, not a sassy song.

Mark Wahlberg, who I'm going to out myself right now as a fan of, Zooey Deschanel (ditto) and John Leguizamo's (ditto again, I'm starting to see why I liked this first time around) characters head off on a kind of let's not commit hari-kari today, eh, road trip. It's all chipper and upbeat, as members of the public continue to randomly off themselves in scenes I'd only before conjured up mentally during a rush hour commute.

There's a sort of love story, which feels a bit out of place, but some of the scenes are genuinely inventive and a touch affecting. It's got a very 70's Sci-Fi vibe, unpredictable, not at all perfect but who wants perfection in a film with this premise?

Bedsit it? Depends hugely on your taste in films, if you like risking things and the sound of what I've described above, then yeah sure. It's better than most of the superhero dross. At least The Happening is trying new things. Ten years ago. 7/10