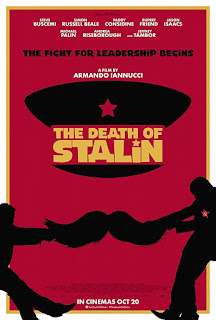 Tagline: “Everybody wants a piece” The least inspired aspect of this film by some distance. Even the poster pisses all over it.

Premise: The paranoid, hateful dictator Stalin dies, his nearest and least trustworthy weasel their different paths toward the power void, and it's fucking hilarious.

Execution: The Death Of Stalin is basically The Thick Of It does Russia, 1953. Only it's so much more risqué than that show, and funny. Which is hard to conceive, something funnier than The Thick Of It. I realise I'm cheating as I didn't watch this film at home, but I did watch it near my home at the rather lovely Rio Cinema in Dalston. Also, in order to have some semblance of a finger on the pulse, rather than just reviews of blu rays I've seen of French films from 2004, I'll need to cover some current/ recent releases.

The cast is one of the best I can remember seeing since A Bridge Too Far. Which to be fair I last watched last year, but it was made in 1977... Oh you get my point, the cast are superb, with Simon Russell Beale the standout as the vile Lavrentiy Beria. Also in there are Jeffrey Tambor (boo), Steve Buscemi, Jason Isaacs, Rupert Friend, Michael Palin, Paul Whitehouse, Angela Riseborough, Olga Kurylenko and a personal favourite of mine, Paddy Considine. They are all, excellent.

The comedy is razor sharp, and the film somehow veers between darkly comic, slapstick, outright belly laughs and horrific drama. So horrific and laced with details which, and I didn't know whether it was real at the time, just oozed authenticity. Without giving much away, Beria's “private” life makes Harvey Weinstein's look romantic. Which I realise entirely gives it away. Forewarned is forearmed! I laughed almost all the way through (writer/ director Armando Iannucci didn't try to make the rape funny, but I bet he could, if he wanted to).

I went out and bought a book on The Death Of Stalin after seeing this film. It's not as funny.


Bedsit it? Fuck the bedsit! Get out and see this brilliant film. So far this is my film of the year, it's going to take a lot of beating. It'll translate well to home viewing so even you sad bastards who watch films on your 15 inch screen laptops will enjoy it (I'm looking at you Carmen, thinking I'm quaint with my Blu Rays). 10/10