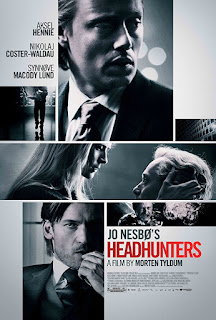 Tagline: “The hunt is on” Clearly the work of someone with a boozy Friday lunch to get to.

Premise: Improbably named Norwegian art burglar Roger Brown has the tables turned on him by a ruthless potential victim. A violent chase ensues with each man trying to outsmart the other.

Execution: Roger Brown though. Roger fucking Brown. It's not even credible as a British character name, unless that character is in a Monty Python sketch. The rest of Headhunters is about as believable as it sounds, but it's pretty fun. And the plot is still more plausible than Roger Brown's name. The action is done well, the suspense builds and there are a few wince inducing moments of violence, and one set piece which you better hope you're not eating through.

What I would say is, why is Jo Nesbo this highly thought of writer? The Snowman looks preposterous, Headhnuters, while entertaining, is about as believable as Jack Reacher, and IMDb credits one of his other novels as “Dr Proctor's Fart Powder”. Hardly intellectual Scandi-Noir.

Bedsit it? Yeah. It's bubble gum for the eyes, just don't take it as seriously as it takes itself. 7/10

PS: I mean surely the benefit of writing your own stories is you can pick the name of the people in it?
Labels: Action Bedsit Film London Movie Norwegian Rated Review Subtitled Thriller