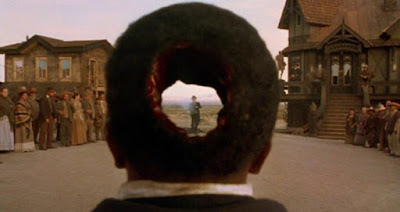 I had fond memories of The Quick and the Dead. Starring Sharon Stone, Russell Crowe, Leonardo DiCaprio and particularly Gene Hackman it has a great cast, and behind the lens the always innovative Sam Raimi. So far so good. The crossover to action, for horror directors, is often an easier transition (see Eli Roth- Death Wish), however Raimi's brief sojourn into the Wild West is a mixed bag. I am a Sam Raimi fan, but he is far, far strongest making horror films.

The central idea, that of a knock out gunfight competition, which is held in a small town and attracts gunslingers far and wide, is rather clever. A leading lady (Stone) in a western is fairly unique even still. Despite this unique concept, the rest of the plot is generic western fare and more annoyingly, The Quick and the Dead also wheels out a parade of staid stock characters. It is also dated and has some glaring editorial errors.

“You must be the fastest gun in the west. That or the biggest liar!”

I feel bad having a go at a film for being dated, but it is. The Quick and the Dead suffers as many highly stylised films do with time. Also much of what is wrong with this film was avoidable, some clunky effects moments and edits are distracting. Saimi's adventure into westerns is only elevated by the quality of acting and the innovative ideas which haven't withered yet.

Bedsit it? If The Quick and the Dead sounds like a bit of you, then tuck in mate. Its fun has depreciated in my eyes, though wasn't quite walking off into the sunset. 6/10
Labels: Action Adam Thorn Bedsit Cinema Bitesize Bedsit Gene Hackman Gore Leonardo DiCaprio Movie Review Review Russell Crowe Sam Raimi Sharon Stone Spoiler free The Quick and the Dead Violence Western