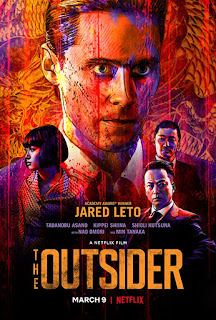 Tagline: “Old Wine In A New Bottle” The Outsider's vinegar is ever so slightly better than than the mucus thick, tart, Annihilation. Chew it down, douches.

Delivery: Jared Leto, surely the Countess Bathory of actors* plays a man inexplicably 40 old years old, a war vet and somehow still in his early twenties. How much the cost of virgin blood added to the budget, I imagine, will be kept a quiet secret. The man is a brilliant actor/ rocker though, and does well here too. However he's let down in so many ways. My initial gripe was that his character wasn't at least referenced to passingly as Meursault, and that the film took precisely no lessons from that rather wonderful novel. Which I realise is personal. Albert Camus' The Outsider is brilliant, go and read it, you bum!

The Outsider's (film) main character, Nick, is a white man in 1954 Japan. Despite having been in a POW camp for ten years, and speaking no Japanese when we first meet him, he manages to learn the language suddenly within minutes of the film's opening. That's fine, it's a film, I told myself. It drew comparisons with Un Prophet, though, and you don't want people to be thinking about that film while they're watching yours. It won't end well. The issue of white saviourism also stinks the film out. But if longer term the worry of this means no films with a character of one colour skin influencing those of another will get green lit, which I fear it will, it needs to do one. We'll end up with segregated films. No thank you.

Nick joins the Yakuza, the Japanese Mafia, and isn't welcome with open arms because he is American. This is rather than his being recklessly violent and a complete fucking sadist, which annoyed me. Despite his being a relentless liability, Nick works his way up the food chain of the family he's joined. That is the whole story. Honestly I could end this review now. Nothing else happens.

It is a film which is pretty to look at, I guess, if you like darkly lit shots and blood. Which I happen to, but not enough to score the film highly. The violence is great but concurrently predictable. I do like violence though. Much of it is also totally uncalled for, much of the time. I'm not against that, I thought. I like violence. But you know that.

The film's main problem is that there is not an original bone in its body, despite top actors and a highly rated director. The Outsider's ending is bad and as predictable as what I assume they thought were stand out gore scenes earlier on. Finally, most importantly, yet again I had a film spoilt by the fact I was watching on my blower and the laptop.

This issue worries me more than say, the bad ending of The Outsider, or the predictability of the plot. I might have missed subtleties (although I doubt it) watching like this. I'm not sharp at best of times, but If I'm getting texts about Clenbuterol, I'm liable to miss bits of a film on the phone. As much as I like, love, even, Netflix, certain films just don't work on the platform. That has to be acknowledged by them, I think, as they move ever deeper into producing high cost material.

Bedsit it? The Outsider only presents as a film of subtleties; it is not one. It is as straightforward as they come, despite some good performances. I've wanted to do reviews of a couple of the films this pales in comparison to for a while: Un Prophet andThe Godfather. Glad I saw The Outsider, but I never will again. 5/10