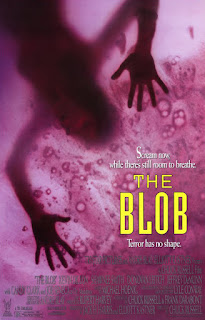 Tagline: “Scream now, while you can still breathe.” The best of the few offerings by way of a tagline. I'd have gone for “Death by sink”.

Premise: A gelatinous alien being, blob- if you will, hits small town America (cheaper to film than the city, I imagine) and ingests everything in its path. Honestly if that isn't all you need to know, then I despair.

Delivery: The 1980's was a boon period for practical effects, being as it was, pre- VFX and at the tail end of when people had to think about on screen believability. “Fix it in post” was not an option then, and while VFX is now approaching looking natural, I'm a fan of practical effects. As it is now 2018, I'm told, I wanted to run a series of reviews of 1988 films. Regular readers will know I also like some inventive gore, and so top of my list of films which turn 30 this year, was The Blob*.

It's a well known horror film trope that if you get jiggy, you get killed. Well, The Blob has a wonderful subversion of that accepted standard. It's clever, and who would have thought that 30 years ago the film-makers would have predicted the #MeToo movement... Oh wait, they didn't, because men have always been rapey. I've whinged about it before, and I will again, but please stop mentioning current events in fictional film reviews like all story telling needs to be prophetic or have a current affairs subtext in order to entertain or have some value. Gripe done.

The Blob is old fashioned cheesy, violent entertainment, it takes a little bit of time to get going, but once it does, boy is it fun. There's not really any layers to it, and that's great, because the last thing I want to see is crowbarred in hidden meanings or references. The only real star of note is Kevin Dillon, who was in Entourage, which I never watched. Director Chuck Russell also directed the somewhat groundbreaking effects film The Mask, with Jim Carey, which is a good indication of how well the effects stand up in this film. 30 years on, it looks better than many, many films made after it.

Bedsit it? The Blob does exactly as advertised- provide semi comedic, creative, gory deaths. It isn't going to be for everyone; I wouldn't recommend chucking it on at a babysitting gig, for example. However if The Blob sounds like it is your cup of tea, then it probably is. 8/10

*Weird aside, if you go into a pub which has a jukebox proudly claiming to host every number one since 1960, see if it has “Mr Blobby” then put that on as many times in a row as your budget will allow. You won't make any friends, but it's a hoot!