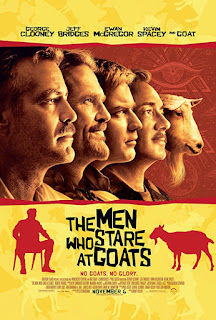 Tagline: “No goats. No glory.” This made me smirk, but will the film?

Premise: Ewan McGregor plays reporter Bob Wilton, who lucks upon a strange section of the US army, who believe they are Jedi like “super soldiers” with special psychic powers. Unsurprisingly some of this involves staring at goats. It's based on a true story.

“Have I?” I replied, pointlessly.

As even my own brain couldn't decide whether it had seen TMWSAG (why do I keep reviewing films with such long titles?) I decided to persevere. I'd love to say I was glad I did, or even that I wish I hadn't, but sadly it was neither. I wasn't overwhelmed, I wasn't underwhelmed, I was just whelmed. If that's even a thing. A middle of the road, PH neutral whelming. If you read many of my reviews, or have ever met me even just the once, you'll know I love a good rant. A rant is cleansing. Good for the blood. All that voodoo shit.

But alas, TMWSAG is so insipid I can't invent the energy to either get down on my knees and suck it dry or up on my soapbox to curse its name. And before you go there, yes I am short so I would also need a yellow pages for the former.

There's not much more to say other than that. Ewan McGregor is fine, as he always is, nothing more nothing less. I always felt Renton was probably more fun on the skag. George Clooney Geroge Clooneys the shit out of his role. Kevin Spacey (boo!) turns up playing an arsehole, which in light of recent unsurprising revelations is somewhat ironic, and there are one or two scenes which made me me smirk. About as much as the tagline.

Bedsit it? Not a great sign that I couldn't recall if I'd seen it before, even by the end. Or that the tagline was as funny as the jokes in the film, but it's still semi interesting enough. I just can't help shaking the thought that the wonderful and very funny Jon Ronson probably wrote a better book than this is a film, even though it's one of his which I haven't read yet. A confused 5/10*

*Scoring. I was chastised by my cousin about my scoring, giving the Killing of a Sacred Deer 5/10 when it was apparently a film I loathed. I understand his point, and I will write a blog about how I score soon enough. But to justify why it got 5 and so did this inoffensive middle of the road pallet cleanser, where this had nothing either great or horrible, TKOASD had a mix of both. So there you are.
Labels: Action Bedsit Bedsit Cinema Comedy Drama Ewan McGregor Film George Clooney Jon Ronson Kevin Spacey Movie Rated Review