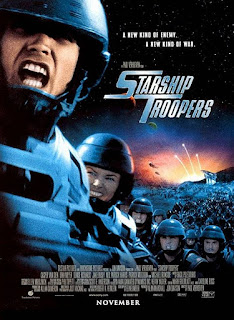 Tagline: “This Fall, Tristar Pictures takes you to the front line of the next frontier.” So far, so Star Trek. The film is 20 years old though, maybe taglines were new. I'm reaching.

Ooh, on the poster it says “A new kind of enemy, a new kind of war.” Which is way better and doesn't name drop the fucking studio that made it.

Premise: Sci Fi from Paul Verhoeven, director of Robocop and Total Recall, in which humans are in a war with space “bugs”. Sounds silly, I know.

Execution: Starship Troopers was the first film I watched on DVD, with my best mate at secondary school and my stepdad. I'll never forget our marvelling at the slow motion clarity, and spending a long time going back through the shower scene, amazed at the genital choreography making sure you never got a glimpse of anything more juicy than a nipple. I mean, seriously, there was probably a credit given for whoever organised that dance of the danglies, and well earned it was too.

My teenage/ ongoing interest in screen nudity aside, that Starship Troopers has reached twenty years old without dating much is a serious credit to Verhoeven and team. The CGI is not perfect but holds up better than even some big budget films today, and the use of models too makes the many visual elements comprising the big effects shots blend believeably (to an extent- it is a Sci Fi!). The acting is deliberately cheesy, but it doesn't detract from the fun, in fact it's been presented that way to enhance it.

The Guardian recently ran a piece analysing Starship Troopers lauding it, rightly, but going into detail about how it's somehow prophetic of the War on Terror. While I get that it is a comment on fascism and the danger of idolising the military and sacrifice for the state, and a well made comment at that, to do that is nothing new. Dulce et Decorum est pro patria mori, and Wilfred Owen was only 100 years ago. I'm pretty sure there were some wars before then where signing up to die was seen as valiant and the right thing to do, but I didn't pay attention in history.

Starship Troopers strength, for me, lies precisely in the opposite of it being a great prophecy or super intellectual insight into this or that, it wears its heart on its sleeve, and just goes all out to entertain you. It's exactly the type of film making that I love. Although I do have a fairly broad taste in films. Just don't put me in front of a musical, I hate musicals. I'd try and review La La Land for shits and giggles, but frankly I'm trying not to drink and I don't want to smash my TV up.