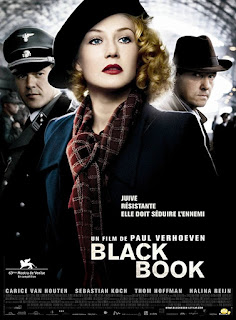 Tagline: “To fight the enemy, she must become one of them.” Which in fairness is vague and tantalising enough.

Execution: Several of them. That's about the only joke I can make about Black Book. Paul Verhoeven is better known for directing uber violent Sci-Fi such as Robocop and Starship Troopers, which just happen to be some of my favourite films. Black Book is a completely different kettle of fish. A two and and half hour war espionage thriller, with some great action, wonderful acting and a plot that twists and turns so much your head will spin.

It's also deadly serious. There's no, “I'd buy that for a dollar!” here. I'd seen it once before this latest viewing in my little solo cinema (that sounds suspiciously like a wanking booth in Soho doesn't it?) but was waiting for a reasonably priced Blu Ray copy. £5 from CeXchange; ahthankyou. It was just as good second time around, the film lost none of its tension, and had the bonus of my spotting a younger Matthias Schoenaerts, who I absolutely love as an actor. If you haven't seen Bullhead or Rust and Bone, see them.

Bedsit it? This is a solid 9/10, possibly slightly more. It's a quality film in every aspect of the word, I'm particularly fond of the way Black Book blurs the lines between good and bad, much like a WW2 The Wire. The only things that make it not an easy choice are that it's pretty bleak in places, and quite long. Subtitles bother some people but not me, unless I'm trying to write while I watch it..
Labels: Action Bedsit Cinema Cinema Dutch Film Holland Movie Rated Review Subtitled Thriller van Houten Verhoeven War